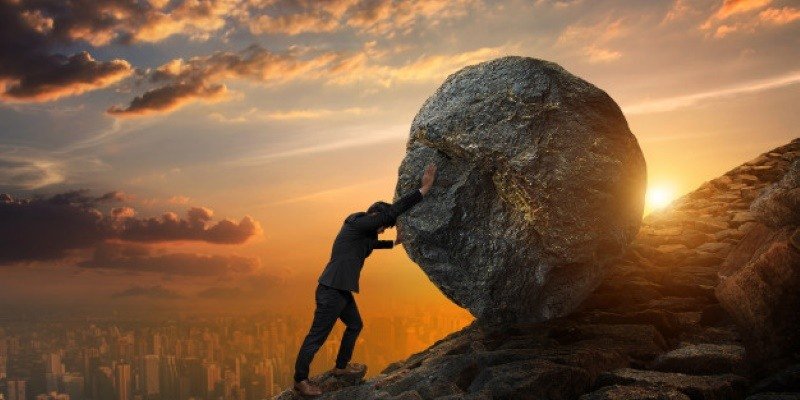 Friday, February 3rd, 2023
One common syndrome when first starting out is jumping from one shiny object to another, which usually has a bad outcome. Then once failing to attempt to juggle these various pursuits, the belief sets in that they’ll never become successful, never make it in business.

They’ve convinced themselves they can’t succeed on their own, so the odds begin to stack up against them that they won’t.

You can always find fault in anything you do, and that’s when discouragement sets in. It will stop you dead in your tracks.

If you wait long enough, the beast that is procrastination then takes over, and then you can think yourself out of anything.

There Has To Be A Better Way

There are plenty of people similar to you, who’s also had a “dire” upbringing, who began with nothing and went on to achieve enormous success.

There’s too much focus that’s placed on amorphous concepts, such as entrepreneurship or outstanding leadership qualities these days, which becomes discouraging.

If you’ve spent enough time around or read about the most successful of entrepreneurs in this world, what most have in common is the majority of them never thought they would become successful.

You may think that the odds of anyone, including yourself, also becoming successful is now more difficult than ever.

The competition is too strict and crowded.

And because of the Internet, there’s the same and too much information that’s readily available for everyone.

You Think What You Become

Yet, it still remains possible for anyone to become successful if they truly want to, the rules haven’t changed.

What it takes is dedicated focus and steel determination to forge ahead, to take a calculated risk.

What you need is the motivation, the ability and the willingness to just take action. This especially after you fail.

So take your best shot since you only get one chance at this thing called life.

There are countless individuals who began with nothing, and ended up making it big. Believe that you can.

11 Steps To Becoming A Success In The Real World

1.) – Take Calculated Risks – One of the biggest reasons why the majority of people fail is because of the fear of taking a risk. They fret, sweat, and squirm and will then take the easy way out. They surrender. What’s guaranteed is you’ll never make it big with this mindset. So go all in.

2.) – Make Sharp Smart Decisions – There’s a good reason why some do well in the business world. They can reason with themselves and others, make accurate judgments immediately. They don’t bother throwing caution to the wind, and won’t base their decisions based on just statistics. They make smart calculated decisions and the odds fall in their favor.

3.) – Have Good Gut Instincts – Those who are successful aren’t fed or influenced by the opinion of others. They’ll take advisement, but won’t become distracted or wait until everyone collaborates and agrees on something. You can’t become innovative if you don’t do it your own way.

4.) – Make Your Own Luck – It’s often been said that luck is once preparation meets opportunity, and this for good reason. Be aware, keep on the lookout at all times, recognize when opportunity smacks you in the face, then grab it, take advantage of it, run with it. You need to be ready at all times when that break comes.

5.) – Know What Really Matters – Don’t get distracted by the herd mentality and never follow the crowd. Don’t spend your most productive hours on the Internet, tweeting or “liking,” messaging or posting all the time on Facebook. They are time and ambition killers. None of this matters, it dulls your production, so find better things to do.

6.) – Begin By Finding A Need – There’s a big misconception that innovation is all about inventing something completely new or trendy. But innovation is more about figuring out and solving what people really need or are wanting, but they can’t have or afford them until you solve it.

7.) – Find Out And Fix Your Weaknesses – We all have weaknesses, so realize what your imperfections are and correct them if you can. We’ve all got holes, so you need to face reality and either fix them, or find someone who can fill in those gaps in your life.

8.) – Learn To Become A Tough Negotiator – If you’re wanting to become a success, you need to fight to get a piece of the pie. There’s no one, absolutely nobody who’s willing to give you their share, so you need to go out and earn it yourself. For this reason, you need to become a strong negotiator.

9.) – Listen And Learn From Others – This is the reason why you need to get out in the real world and find out how things are done, by working for successful companies or individuals. You’ll then learn how things work in the business world. You’ll then learn how to manage and be managed. You’ll learn the ropes and protocol from those who’ve actually accomplished something, so just shut up and learn.

10.) – Just Go Do It! Do It! Do It! – You need to decide if you have the “goods” inside of you to take it all the way to the top. No one ever got anywhere by just sitting on their butt and waiting, saying, “Someday, one day, I’ll do that … perhaps tomorrow.”

11.) – Work Hard When You Need To – You think you’re one of the chosen ones, you’re special, where success and wealth will come your way sooner than later. These types of “gifted” individuals however are few and far between, if they even exist. You need to get out there and work hard.

Just Go Do It

If you’re not willing to work hard when you need to, then just prepare yourself for a life of mediocrity.

It all begins with doing the hard work first, then add more hard work, then success will eventually trickle in.

Only in that order.

So dedicate yourself, tell yourself you’ll do whatever it takes.

Stop telling yourself why you can’t do something.

Don’t be that person who always begins to nitpick and parse everything, thinking you know better, or perhaps it’s just laziness.

If that’s you’re attitude then you’re not going anywhere.

If you ever want to make it big, just suck it up and say with conviction, “Sure, no problem, I’ll do it.”

Go ahead, practice that attitude in the mirror first.

Prepare to take action. Think of doing something, anything, and go out there and get it done.